Skip to content
I am pleased to report that Whites are due to start work at Hanslope on Monday 9 September.   The bells will be removed from the tower during that week and then transported to Appleton for the refurbishment to begin.  It is estimated that the work will take between three and four months to complete.
Work was originally due to begin in mid July, but Whites had to reschedule the date because there was a backlog of work at the foundry which meant the frame would not have been ready in time for this start date.  Will get back in touch when I have some more information for you.
It’s so exciting to think that the project is finally getting underway, there were times when it felt like it was never going to happen.
Sheila Blenkhorn – Hanslope

‘The Branch Practice for this month (August) was held at Milton Keynes Village and was well attended with 25 members representing 11 Towers.  Ringing ranged from plain doubles and  minor, Stedman Grandsire and a couple of courses of Carlisle Surprise Minor were successfully brought round.

Thanks to the local ringers and the incumbent for allowing us to ring, and to all who attended and made this a constructive and beneficial practice. A collection was taken up of £42 which was shared equally between MKV tower and the OD Bell Fund.
Next Branch Practice will be in October at Lavendon (6 Bells 10cwt) on Saturday 21st September from 5.00 – 6.30pm 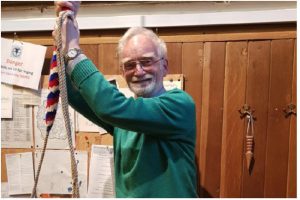 Cllr Martin Petchey (Lab, Stantonbury) held the position of MK’s first citizen until last week and marked the end of his year in office by handing over a cheque for £7,455.90 to the Bus Shelter MK.

At the start of his term in office Cllr Petchey set himself the task of completing about 45 minutes of continuous ringing – called a quarter peal – at all 21 available set of church bells in the borough.

And he completed the task without dropping a clanger on his very last day in office, at Old Wolverton. He is pictured at his home tower, Woughton-on-the-Green, where he began the clang-athon.

Cllr Petchey said: “One of the highlights was to ring a new method celebrating the anniversary of the consecration of Christ the Cornerstone Church in Central Milton Keynes – this was at Lavendon, as Cornerstone does not have bells.”

Cllr Petchey, who bell rings in the little spare time he has after carrying out his councillor duties, added that only non-ringers call it campanology.

He said that anyone who wanted to donate to the cause could still do so by making a donation to The Bus Shelter MK via its website.

(Reproduced from MK Citizen with permission)

I’m really pleased to be able to confirm the final value raised by the recent Ringing Day, organised by North Bucks.
This was a tremendous result and the Bell Fund Trustees are grateful to all the Church Authorities who allowed their bells to be used and we say a huge “thanks-you”  to everyone who played their part in making the day a success.
The weather was excellent and the visitors did not seem deterred by the MK Marathon which was on at the same time. 24 towers were opened and £1151.20 was collected from visiting ringers for investment.

Thanks to you all and very best wishes