Towers that are ringing on Sunday:

Towers chiming one bell on Sunday:

Towers that are not ringing until further notice:

The Central Council of Church Bellringers formal notice is given below:

New updates on the Coronavirus have been issued by the UK government today (Monday 16th March), which include avoiding any “non-essential” travel and contact with others and avoiding pubs, clubs theatres and social gatherings.  If you haven’t already decided to cancel ringing activities, it seems that now is the time to do so.

We must all ensure that we are following the most up to date advice from the Chief Medical Officer (or overseas equivalent) with regard to the Covid 19 outbreak.  Of course the Central Council is not in a position to provide professional advice, however there are some simple guidelines to consider to ensure that we adopt sensible precautions and support each other through a period of rapid change and uncertainty.   The advice is changing almost daily and the latest messages concern potential restriction of movement of people over the age of 70 in the coming weeks, if not sooner.

The demographics of the ringing community has a large proportion who fit in to the over 70 year old and/or medically vulnerable category, and ringers can be quite stubborn when it comes to continuing ringing, insisting that we “keep calm and carry on”.  However, under the current circumstances, we have a duty to be responsible for ourselves and towards others we ring with.  If you fit into a category that has been advised to socially distance yourself, please heed that advice.  If not for you, then to help prevent putting other people at risk.

Having said that, socially distancing yourself can create a sense of isolation, and we must ensure that we maintain contact with our ringing friends, and offer any help and support where we can.  Please check in with those who are advised to stay home, phone them for a chat to ask how they are, drop them a quick text, Whatsapp or social media message to let them know they haven’t been forgotten.

If you find yourself self-isolating, consider how you might get your ringing fix if not on the end of a rope.  There are many apps for phones and computers that you can utilise to learn methods, practise listening skills and so on. There’s a multitude of YouTube videos on various aspects of ringing, ringing up and down, rope splicing and many other tower tasks that need doing.  Get out some good old paper and pencil to write out methods, learn the place notation, write out touches etc  – that’ll keep you busy for hours!  Keep in touch with friends on the various bellringing social media communities, maybe even start one of your own.  Get that tower website up to date.  Get around to writing up last year’s tower AGM minutes.  Plan what you are going to do once the restrictions have been lifted, maybe organise a reunion.

Keep up to date with the latest advice from the government, ensure that you support each other, keep calm and keep safe.

Below are the results and a photo of the team.

Many congratulations to our treble ringer, Jen,  who stood in at the last moment due to Hannah Cromblehome not being well that morning.

Special mention to excellent treble ringing – Woughton on the Green 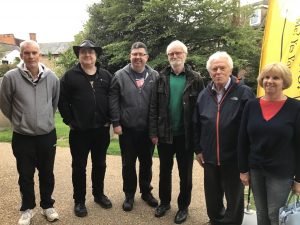 The North Bucks branch outing culminated in a late-afternoon drive almost to the front door of the Marquis of Northampton at Castle Ashby, but had begun some seven hours earlier at Bromham, near Bedford, where the church of St Owen stands a distance from the present village, in the middle of a park created by the Dyve family in the seventeenth century and containing the earthworks of the deserted earlier village.

Bromham bells are a Taylor eight of 21cwt, augmented from a Taylor six in 1934 and therefore Simpson-tuned, very dignified and perhaps the most musical of the bells encountered during the outing.   As you might expect, we rang Grandsire, Plain Bob and Stedman – though there is a St Ouen Doubles, there isn’t an extension to triples, so we weren’t able to honour the unusual dedication with our choice of methods.

Our next tower, Stevington, a leisurely 10 minute drive away, could not have been more of a contrast.  An eighteenth century five, the historic sound reminded us of what change-ringing must have sounded like in its earliest days.  The bells are hung in an Anglo-Saxon tower (much like Lavendon), and rung from a ground floor ringing chamber entered through a side opening, as the entry from the nave has been blocked by the re-erected Jacobean chancel screen.  The church had many other historic features, not least two ruined aisles each side of the chancel, and those not engaged in rehearsing their repertoire of doubles methods found much to keep them intrigued.

On to Carlton, a  pleasant 9cwt six, though by this time we had started losing ringers to events back in MK, and then to lunch at the Fox in the village.  The relaxed timetable gave us plenty of time to enjoy a leisurely meal in good company and sample the beer on offer – some of us were bold enough to try the Norwegian Blue, which was definitely not an ex-beer.

Harrold, just across the Ouse, are another six, a little heavier at 13 cwt, and given a sonorous tone by the reverberations in the spire.  Equally of note was the huge gap between 1 and 2, left to give room for the augmentation to eight that hasn’t happened yet, and that 4,5 and 6 came down vey close to the edge of the balcony.  At a personal level I was glad to see my godfather’s name appearing as a churchwarden on a peal board from nearly fifty years ago.

Bozeat, our first of two Northants towers, was nearly a lock-out – the tower captain had chosen to go to Yorkshire instead of meeting us – but keys were rustled up in time for a quick grab.  The belfry had a very old-fashioned feel, full of black varnished peal boards from a previous century of five bell peals at the tower, often in methods not now much rung, achieved before its augmentation to a 16 cwt six.

And so to Castle Ashby, our final tower.  The church is situated between the big house’s terrace garden and the orangery – as Pevsner says, rarely is a church made so much part of the private garden furnishings of a mansion, and so to get there we had to pass by the front door of the Marquis of Northampton (though the church access is no longer through his garden, as it once was).  The presence of the marquis and his ancestors is just as prominent once you get inside the church, not least through a twice or three times life size carving in gleaming white marble of an angel about to play the last trump, placed at the west end of the nave in memory of a nineteenth century marquis.  It’s only a shame that the family didn’t spend more on the bells and less on monuments.  A 19cwt five would be challenging under any circumstances, but a long draft and poor hanging doubled the difficulty.  Methods without dodges (Reverse Canterbury, All Saints) came to the fore, as we rang on what was the oldest bell of the day – the fourth was cast in the first year of Henry VIII’s reign.

Many thanks to Doug Hird for organising a successful  and well thought out tour around towers in the district’s near north – the result of meticulous preparation and careful reconnaissance.

OXFORD DIOCESAN GUILD
TEN BELL COURSE
A One Day Course organised by the
Guild Education Committee
Saturday 30th November 2019, 10.00 a.m. to 4.30 p.m.
at
St Michael and All Angels, Aston Clinton
A course on
Plain and Little Bob Royal
for Guild Members who would like to develop their 10 bell ringing.
There will be a charge of £12.00 to cover a tower donation
and refreshments. Own arrangements for lunch.
(Pub/restaurant facilities available quite close to the Church)
NUMBERS WILL BE LIMITED SO BOOK EARLY
TO AVOID DISAPPOINTMENT
The closing date for applications will be 3rd November.
To apply for this course please contact Patricia Newton
Tel: 01844 352926 email: steward@southoxon.odg.org.uk

OXFORD DIOCESAN GUILD
TEN BELL COURSE
A One Day Course organised by the
Guild Education Committee
Saturday 2nd November, 2019
10.30 a.m. to 3.30 p.m.
at
St Andrew, Shrivenham
A course on
Grandsire Caters
for Guild Members who would like to develop their 10 bell
ringing.
There will be a charge of £12.00 to cover a tower donation
and refreshments. Own arrangements for lunch.
(Pub/restaurant facilities available quite close to the Church)
NUMBERS WILL BE LIMITED SO BOOK EARLY
TO AVOID DISAPPOINTMENT
The closing date for applications will be 12th October.
Preference will be given to ringers who have not attended
previous ten bell courses.
To apply for this course please contact Ken Darvill
Tel: 01494 713217 email: secretary@odg.org.uk